How I Started Rafting in La Ceiba, Honduras 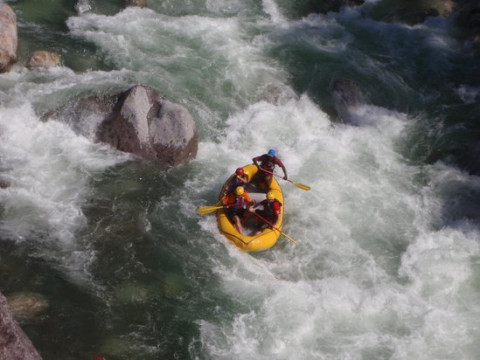 My friends and I had been in La Ceiba for a few days, pretty much doing nothing other than being tourists and hunting for some good parties. La Ceiba, in fact, is known for its vibrant nightlife. So I guess my friends were a bit tired of the party scene and decided we should go outdoors and do something new, get in touch with nature.

Let me start off by saying I have never really been the athletic type. To clarify that doesn’t mean I am completely useless when it comes to physical activity, but I’m no Olympic sports participant.

Naturally, when my friends threw it on me that we would be white-water rafting, I got a bit nervous. I had seen videos and such, and always thought it looked kind of dangerous. Also, at that moment I had no idea this was such a big hit in La Ceiba, and being the skeptic that I am I expected the worst; an inexperienced guide, faulty equipment, all the works. I guess now, looking back, I feel bad about not having any faith in these people. I must say I’m glad I was proven wrong.

Luckily for me, I had a couple days of mental preparation before jumping on the raft. I did some research and read about other people’s experiences, hoping that I wouldn’t need any superhuman or jock-y skills. I knew about the risks, but the thrill of the experience itself made me forget about it. The adrenaline rush, the feeling in your stomach, and the sense of freedom you get were really motivating to me. It all sounded just too good.

So the day had finally arrived. I woke up not really thinking anything of it, I didn’t feel particularly excited, but at least I wasn’t feeling terrified either. I thought, “well, it can’t be THAT hard.”

It was a beautiful day out, very sunny and clear skies. I’ve never really been a fan of the heat, but I preferred it over any other weather that could make the waters even rougher. Being the beginner that I was, I wanted this experience to be on easy mode. I love nature and love feeling surrounded by it, but I had never encountered it in a way that wasn’t absolutely tranquil and peaceful. But I guess it’s good to get a good adrenaline rush once in a while.

We thought it would be a good idea to get a good meal before rafting, and then we were on our way. We found ourselves leaving town and on the road. We drove for about fifteen minutes, and we had made it. All the nervousness I had suppressed for the last couple of days was finally weighing in on me. What if I bounce off the boat and hit my head? What if I fall into the river and get dragged God knows where? Now all these questions were filling my thoughts. “Well, you’re here already. So suck it up.”

We were greeted by some very nice and welcoming personnel, which made it easier to get into something that was completely new to all of us. They assured us we were in good hands, and there was nothing to worry about.

They started off with safety instructions and proceeded to do some simulations with us, about possible scenarios we might encounter out in the water. We were taught how to operate our safety equipment, how to properly put on our vests, how to react to sudden movements and how to keep ourselves balanced.

Ironically, these safety tips were making me a little more nervous. Also, though, the fact that the guides seemed to really know their stuff made me feel confident and excited for the new experience to come.

The Cangrejal River was definitely a sight. You see lots of rivers in Honduras, but I had never seen one like this before. The majestic rocks on the loud, rough river was a first for me, and I made my best attempt to imprint every sound, smell and sight on my memory. Besides the experience, we got to see breathtaking landscape. This just made it even better for someone who enjoys these sights as much as I do.

We were getting ready to get on the boat when a different group was coming back from their tour. They soaking wet, smiles on their faces, looking exhausted but the thrill they had just felt hadn’t worn off yet. After asking us if this was our first time, they wished us luck and let us know how much we would love it. Now I was more excited, but the nervousness was still all there.

I decided to sit as close to the guide as possible, in my attempt to feel safer in my endeavor. My life was on his hands, and on my helmet and life jacket. I looked back at my friends with a nervous, clueless smile. I really had no idea what to expect.

I wasn’t done saying my prayers when we started moving. My stomach began to turn as I realized there was no turning back now. This was it.

It started a bit slow, I guess to get us settled in the experience, to get a feel of the paddles and to get us going. I thought this was a nice transition, but I knew the worst (or best) was yet to come. The water started getting rougher, and the boat was now going faster.

The first descent was a little scary. I felt unstable and helpless towards mother nature. Trust me, when you’re being tossed around the water on an inflatable boat, that’s when you really get a hold of how powerful nature can really be.

As we slid down the rocks a couple more times, I started feeling more confident. The fear of the unknown was beginning to wear off, and I was just left with the thrill I felt from the start. The adrenaline rush was something I had never experienced before. The water splashing all over us, followed by the sun’s heat all the while feeling the rush all over our bodies was something I will never forget.

“Nature’s roller coaster,” I thought to myself. A roller coaster with an extra element of risk and danger, where you don’t feel nicely pressed and tight against a chair, just waiting for the rush to kick in. This was us, taking over the wild waters of Rio Cangrejal, feeling the rush from the quick movements and from the risk of falling off the boat (a recurrent thought of mine throughout the whole ordeal). I still am so grateful for our tour guide and how professional and experienced he was.

I had always wanted to try something as extreme as this, but this was the last thing on my mind. Bungee jumping, skydiving, all seemed safer to me because of the lack of actual effort I would have to do myself. I must say feeling like I had to rely on nobody else but myself to survive was terrifying but also extremely rewarding. I’m grateful for how positive this experience turned out to be, and how prepared and patient the team was with us. It definitely helps to have such understanding people guiding you as you’re rafting on rough waters for the first time ever.

Throughout the whole ride, I must admit I felt scared for my life several times. That feeling you’re about to fly off the boat is as inevitable as tomorrow’s sunrise. I also felt adrenaline like never before. Every descent felt better than the last, and with each passing second my confidence grew bigger and bigger. The satisfaction of accomplishing something like this wasn’t so bad, either. Overall, it was definitely an awesome feeling.

As we were heading to the finish line, I thought about how lucky I was to have had this experience. The fact that I got to try something like this in my own country for the first time made it even more special. The bond I felt with nature was even stronger because it’s a piece of land I call my home.

Even though we were pretty close to town, I felt so isolated in such a good way. That mixture of an extreme emotion surrounded by the calmness of the untouched land we were on was something new to me. It was a powerful thing to see how we were so easily moved by the current. The feeling in my stomach, the rush, the views, and the power of nature add up to an event in my life I will never forget.

If you’ve ever felt drawn to doing something like this but chose to refrain because you don’t have “the skills,” think again. You don’t need superpowers to make it through white-water rafting. In the end, this will be an adventure you will not regret for one second. Put your hands on a good, professional team, and it will become an experience of a lifetime. 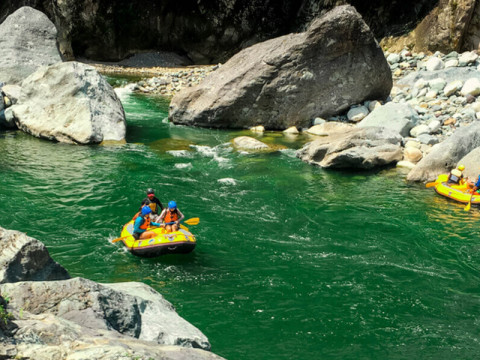 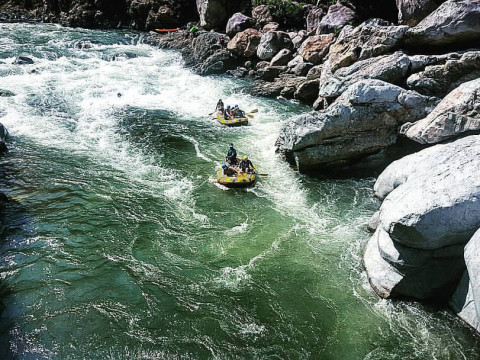 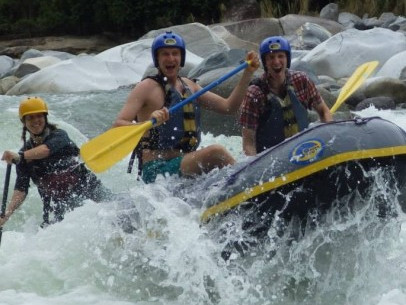